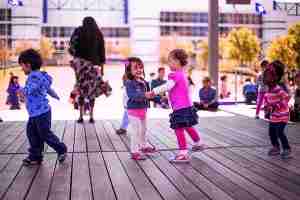 Toddler Tuesdays, presented by Discovery Green and Houston Public Library, is at Discovery Green Park in downtown Houston. April 10 to May 29, 2018. Every Tuesday at 10:30am, parents and kids enjoy a free story time and activities with their favorite characters. Grab your little ones and head to the park for a morning of fun at these free events!

Story time begins promptly at 10:30 AM, so arrive early. Help us promote literacy and the love of reading by being a part of our book exchange each week. Bring a new or gently used book, and trade it for another great story! END_OF_DOCUMENT_TOKEN_TO_BE_REPLACED

You know it’s Spring when the Houston Art Cars roll! Houston is the home of the first and largest of it’s kind. With entries from all over the Country, it attracts an audience 300,000.

What is the Houston Art Car Parade?

The Houston Art Car Parade, presented by The Orange Show Center for Visionary Art, is the world’s biggest celebration of Art Cars and the largest free public art event in the city of Houston. Now in its 31st year, the parade attracts over 250 cars and other entries from 23 states including Canada and Mexico and an audience of 300,000 spectators eager to see the weird and wild vehicular creations. The parade is celebrating its 31st year and is bigger than ever!

Wait, what is an Art Car?

Art cars or art mobiles usually begin their lives as an older or used vehicle (car, truck, van, bus, jeep, golf cart, etc). The owner of the car decided they want to alter their automobile, not necessarily converting what’s under the hood, but instead transforming the exterior/interior of the car. Some artists approach the alteration of their cars cautiously and tentatively, opting to use materials of a temporary nature such as paper or tape, while others decide to radically change the original structure of the vehicle so that it in effect becomes a moving sculpture.

When and where is it held?

When: Saturday, April 14, 2018 we roll from 2pm – 4pm. The parade route opens at 11am for a perfect opportunity to see the entries up close and stationary – meet the artists!

Is there a cost to attend?

No, the parade is free to the public!