Where to Rent Car Seats?

Baby Equipment rental services a great choice when considering where to rent car seats. These companies are 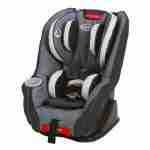 located throughout the US. There is a misconception that only car rental agencies offer car seats to rent, that is not the case. These local baby gear rental companies tend to provide more selection at better rates. They offer car seats for children of all ages, from babies to big kids. In addition, most have both budget and high-end carseat options to cater to all families. Thus, allowing the customer the ability to choose. Safety is not only important for car travel, it’s the law. It’s important that your child is secured in an appropriate safety seat in any vehicle when traveling. So, know that you have options when asking, “Where to rent car seats”. Continue reading for actual rental options.

END_OF_DOCUMENT_TOKEN_TO_BE_REPLACED

We are often asked about cribs. Rockabye is fully compliant with US Crib Safety Standards and maintains Certificates of Compliance for every crib in our inventory. In this post we will discuss everything from dimensions, to crib types, and how the current regulations became law. We hope you will find this post informative and helpful, whether planning for a rental or looking to purchase a baby crib. If you have questions, the CPSC offers much information. 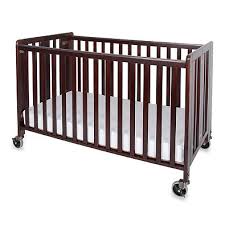 Who knew cribs and baby beds could be political? Most people aren’t aware that baby goods manufacturers, just like most other industries, have lobbyists in Washington, DC who advocate for the manufacturers when the government is deciding laws and regulations. In the past decade we have seen sweeping changes regarding cribs in the US. Yes, the good old drop side crib has been banished. The drop side design itself is not the problem. Drop side cribs were the standard in the US since the 1940’s and it was common that cribs were handed down from one generation to the next. Just like cars, changes are necessary to keep people safe. END_OF_DOCUMENT_TOKEN_TO_BE_REPLACED

Here is a listing of Independent  Equipment Rental Companies by State. The companies below are reputable independent local businesses. We highly recommend these companies over brokers and individuals operating on gig platforms. What’s the difference? Independent companies register in their cities, so maintain a business license and tax permit to operate as a business. Thus, these companies comply with regular inspection to assure compliance with Federal and State requirements, as well as necessary local Health Department practices for cleanliness.

We personally know all these owners.  We only include legitimate full time businesses in our list of providers we recommend.

END_OF_DOCUMENT_TOKEN_TO_BE_REPLACED 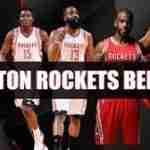 In support of our NBA Houston Rockets, snag Houston 15% off coupon for your rental order of $50 or more in Houston through the NBA finals! Coupon Code = HOT4HOU

Toddler Tuesdays, presented by Discovery Green and Houston Public Library, is at Discovery Green Park in downtown Houston. April 10 to May 29, 2018. Every Tuesday at 10:30am, parents and kids enjoy a free story time and activities with their favorite characters. Grab your little ones and head to the park for a morning of fun at these free events!

Story time begins promptly at 10:30 AM, so arrive early. Help us promote literacy and the love of reading by being a part of our book exchange each week. Bring a new or gently used book, and trade it for another great story! END_OF_DOCUMENT_TOKEN_TO_BE_REPLACED

The Law in the USA

Drop side cribs illegal to manufacture, sell, or even donate in the US. All cribs sold in the US—new or used—are now subject to the most stringent safety standards in the world. That’s the goal of the new crib safety standards put in place on June 28, 2010, by the US Consumer Product Safety Commission (CPSC). END_OF_DOCUMENT_TOKEN_TO_BE_REPLACED

You know it’s Spring when the Houston Art Cars roll! Houston is the home of the first 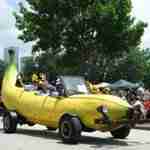 and largest of it’s kind. With entries from all over the Country, it attracts an audience 300,000.

What is the Houston Art Car Parade? 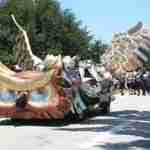 The Houston Art Car Parade, presented by The Orange Show Center for Visionary Art, is the world’s biggest celebration of Art Cars and the largest free public art event in the city of Houston. Now in its 31st year, the parade attracts over 250 cars and other entries from 23 states including Canada and Mexico and an audience of 300,000 spectators eager to see the weird and wild vehicular creations. The parade is celebrating its 31st year and is bigger than ever!

Wait, what is an Art Car? 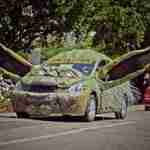 Art cars or art mobiles usually begin their lives as an older or used vehicle (car, truck, van, bus, jeep, golf cart, etc). The owner of the car decided they want to alter their automobile, not necessarily converting what’s under the hood, but instead transforming the exterior/interior of the car. Some artists approach the alteration of their cars cautiously and tentatively, opting to use materials of a temporary nature such as paper or tape, while others decide to radically change the original structure of the vehicle so that it in effect becomes a moving sculpture.

When and where is it held? 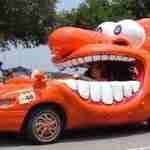 When: Saturday, April 14, 2018 we roll from 2pm – 4pm. The parade route opens at 11am for a perfect opportunity to see the entries up close and stationary – meet the artists!

Is there a cost to attend?

No, the parade is free to the public! 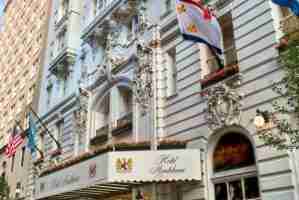 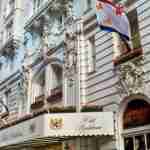 Rockabye Baby Rentals delivers regularly to the Hotel Monteleone. Whether you require a full size crib with linens for your child, a stroller, or toys to keep your little one happy. This hotel is the pinnacle of luxury and history, a New Orleans favorite with travelers and locals alike. Offering the ultimate in luxury, this property boasts over-sized sleeping rooms. Thus, rooms allow sufficient of space for cribs and the baby rental gear you require. Additionally, the Concierge staff is terrific to work with and can assist with baby equipment needs. Once you book your stay, either speak to the Concierge about contacting Rockabye to coordinate baby rental needs. Or  simply notify them that you have made arrangements with us directly to deliver your items. 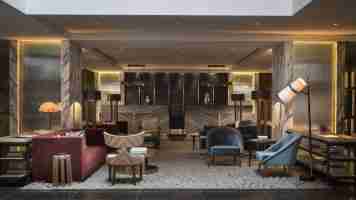 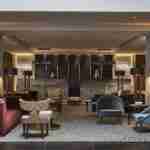 The Four Seasons Houston is a favorite of Rockabye customers. Need a full size crib for your toddler or a stroller to get around the city, we have the gear.  This jewel of Houston’s downtown is an elegant retreat in the heart of the city. The Four Season’s is luxury whether your travel is for business or pleasure. Additionally, the Concierge staff will assure your comfort. They are happy to assist with arrangements for your baby equipment rental needs. Once you book your stay, either speak to the Concierge about contacting Rockabye to coordinate baby rental needs. Also, you can contact Rockabye directly and notify the concierge that you have made arrangements with us directly to deliver your items. 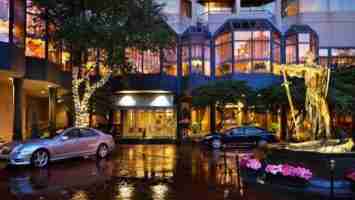 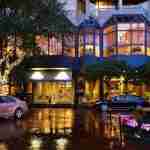 Rockabye Baby Rentals delivers regularly to The Windsor Court Hotel. Whether you require a full size crib with linens for your child, a stroller, or toys to keep your little one happy. This hotel is New Orleans favorite with travelers and locals alike. Offering the ultimate in luxury, this property boasts over-sized sleeping rooms. Thus, rooms allow sufficient of space for cribs and the baby rental gear you require. Additionally, the Concierge staff is one of the friendliest in the city. Windsor Court concierge has the experience to assist with arrangements for your baby equipment rental needs. Once you book your stay, either speak to the Concierge about contacting Rockabye to coordinate baby rental needs. Or  simply notify them that you have made arrangements with us directly to deliver your items.

Rockabye does NOT deliver or pick up at Airports due to DHS and FAA security restrictions. We are sorry for any inconvenience, but we abide by all Federal, State and Municipal laws and regulations. Dismiss